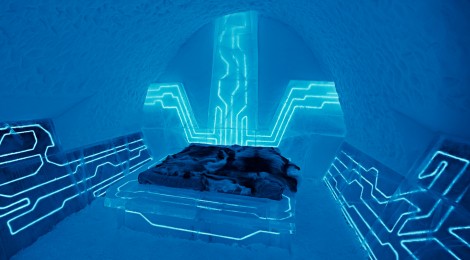 Today we had a skype lecture! It was from an architect named Ian Douglas-Jones who is a previous student of one of my tutors, Ranbir. He talked about what being an architect involved and a few of his projects over the years. It was interesting hearing a designer talk about their work and the processes they used to get to their idea’s end result I was impressed by him collaborating with Disney. He designed the interior of one of the rooms in the Ice Hotel in Sweden which is the project he focused on in this lecture. The theme of the room was based upon a Disney film named ‘Tron’. He decorated the room with strips of blue lighting to fit the sci-fi scene and carved ice blocks into furniture and features. They cut grooves into the ice and inserted energy efficient EL wire and then iced over the wire to keep it in place. For this project he worked alongside Ben Rousseau.

I learnt that no matter how accurate and detailed your designs could be on paper, your end result could be different due to factors that you cannot prevent. In the case of the Ice Hotel, they couldn’t control the size of the ice blocks they were provided with and the room was a different size to what they were expecting. A large part of being a designer is having the ability to respond effectively to these types of problems and being able to solve them. It’s good to have alternative ideas in case flaws arise. Another is getting properly involved with your design. Ian did this as he physically made it using a variety of tools and equipment. You not only need a creative mind and extensive knowledge on drawing and planning etcetera, but also to have a variety of information on materials, techniques, technology and how and when to use certain tools. Competition is a large part in the design industry as it motivates people to think outside of the box to create innovative new ideas. 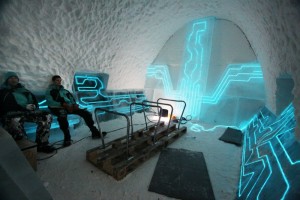 Ian and Ben at work