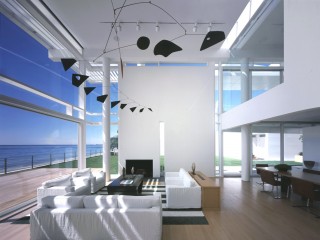 The early 1960s in New York saw the rise of the minimalist movement. It lasted a few years and ended by the late 1960s. Artists during this period favoured the cool over the more ‘dramatic’ approaches to colour, form, media and so forth. They avoided the use of ‘deeper meanings’ such as symbolism, metaphors or emotional content and instead focused on the materiality of their work. Their influence spread throughout America and into Europe. It represents qualities such as truth, simplicity, harmony and order. Minimalists often used industrial materials with simple, repeated geometric forms.

In terms of architecture, a good example of minimalism is in Richard Meier’s (and Michael Palladino’s) White Beach House. It is situated in Southern California and was built between 1999 and 2001. The house is painted all in white, including most of the interior furnishings using a limited colour pallet. There is also aluminum exterior wall panels and modular window. There is a large use of glass and sliding doors which connects the inside to the outside. The beams at the roof, located above the horizontal framing, express the structural rhythm and layering of components. It’s front faces onto the Pacific Ocean, has a courtyard to the west and the highway to the north. The open space of the courtyard, which is a visual and spatial link with the entry, also creates an exterior living room. There is a translucent north entry wall with a two story entrance which provides a framed view through the living room and out into the ocean. There is a second level glazed bridge walkway. 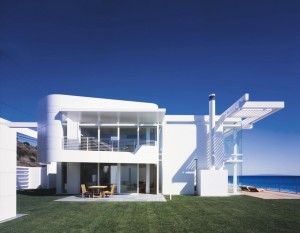 Another famous minimalist artist was Tony Smith. In 1962 he created a sculpture named Die. Smith described the sculpture as “a six-foot cube of quarter-inch hot-rolled steel with diagonal internal bracing.” The proportions of the human body are determined in the dimensions of the sculpture. If the sculpture was a larger scale it would have been known as a monument, or at a smaller scale it would’ve been known as merely an object. As a viewer we are able to walk around the cube and admire it from all angles. You can experience it sequentially, one or two sides at a time. A key characteristic in minimalist sculptures is the use of unreadable surfaces and frank lack of visual appeal which is also shown in Die. It breaks away from traditional ideas of art as something emotionally or aesthetically appealing. 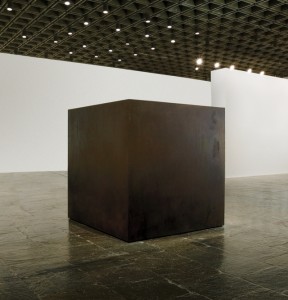